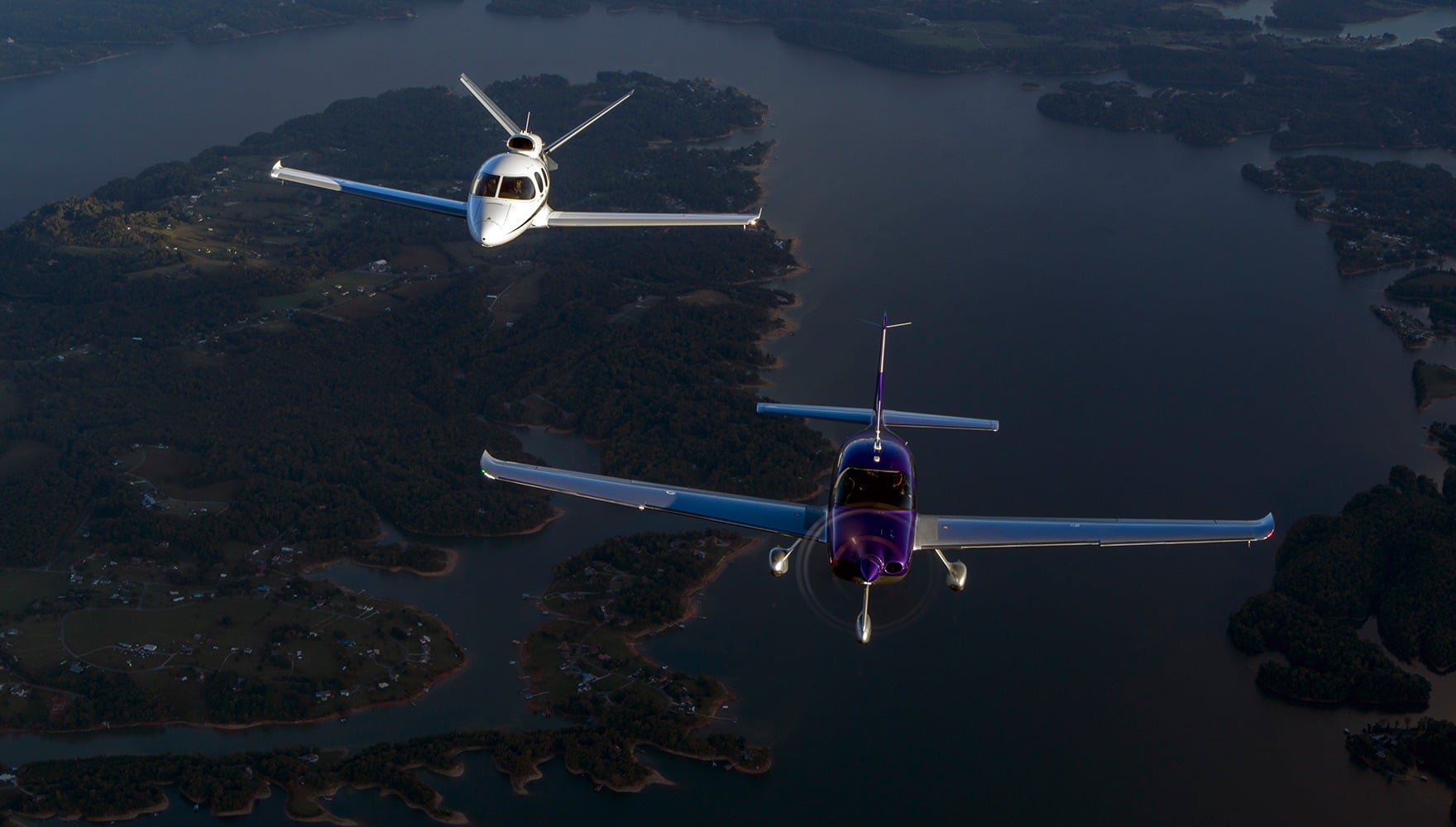 Duluth, Minn. & Knoxville, Tenn. (25 March 2021) – Cirrus Aircraft today announced an impressive year of new aircraft deliveries in 2020, with the SR Series continuing to be the best-selling high-performance piston aircraft for the nineteenth year in a row, and the Vision Jet™ also continuing as the best-selling jet in general aviation for the second year in a row. In addition to delivering 346 SR Series aircraft and 73 Vision Jets in 2020, Cirrus Aircraft certified and began delivering the Safe Return™ emergency autoland system on the Vision Jet and introduced the comprehensive VisionAir™ jet-ownership solution for new entrants into personal aviation.

“This past year has been an extraordinary demonstration of our team’s ability to persevere during unprecedented challenges,” said Zean Nielsen, CEO at Cirrus Aircraft. “In addition to executing on our plans, we have continued to introduce new people to aviation around the world as demand grew throughout the year for our products and services. We are committed to continue delivering a world-class aviation experience to our over 8,000 SR Series owners and more than 245 Vision Jet operators worldwide.”

This last year marks the seventh consecutive year that Cirrus Aircraft has delivered more than 300 SR Series aircraft. Additionally, the Vision Jet continues to deliver into new global markets and has now surpassed 245 Vision Jets in service around the world. Over 450 pilots have now earned their FAA type rating in the Vision Jet. Expansion of Cirrus Services™ also fueled enterprise growth, including the introduction of new Cirrus Certified offerings from Cirrus Direct™ and the expansion of Cirrus Finance™ into international markets.

The SR Series Reaches a New Milestone with More Than 8,000 Aircraft Worldwide

In January, the company unveiled a new Limited Edition aircraft to commemorate the delivery of its 8,000th SR Series aircraft later this year – the 8000 Limited Edition SR Series. Inspired by the company’s rich history of designing and building aircraft that inspire people to experience the world through personal aviation, the new design features bold colors and unapologetic accents on the exterior and interior.

Cirrus Aircraft’s first high-performance SR Series airplane – the SR20 – was first delivered in 1999 and transformed general aviation with intuitive avionics, game-changing performance and revolutionary safety systems, including the Cirrus Airframe Parachute System® (CAPS®). The SR Series has been the world’s best-selling single-engine piston for 19 years in a row, with a portfolio that includes the SR20, SR22 and the turbocharged SR22T. The SR Series worldwide fleet currently exceeds 11 million total SR Series flight hours in more than 60 countries around the world.

Last year, the company announced the launch of the 2020 G6 SR Series, the most technologically advanced models ever of the world’s best-selling SR20, SR22 and SR22T high-performance piston aircraft. The highlight of the new model year included the introduction of the Cirrus Aircraft mobile app powered by Cirrus IQ™ – providing a real-time digital connection to the airplane from virtually anywhere in the world. Further enhancements included re-imagined interior and exterior aesthetics featuring a line of bold new colors.

These new features alongside additional upgrades to the industry-leading Cirrus Perspective+™ by Garmin® flight deck make the G6 SR Series the most comprehensive, integrated and intelligent flight experience available today, enabling a smarter aircraft, a smarter pilot and smarter flying.

Continuing to redefine transportation as the world’s first single-engine Personal Jet™, the Vision Jet experienced further evolution with Federal Aviation Administration (FAA) certification of Safe Return emergency autoland – a revolutionary system enabled by Garmin’s autoland technology that allows passengers to land the Vision Jet with just the touch of a button in emergency situations. The Safe Return certification followed tremendous growth of the Vision Jet, including it becoming the world’s best-selling jet in general aviation and delivery of more than 245 Vision Jets, with more than 450 FAA Type Ratings worldwide. Now, with Safe Return and the Collier award-winning Cirrus Airframe Parachute System (CAPS), the Vision Jet provides the most comprehensive, must-have total safety solution in general aviation.

The company also announced VisionAir in 2020, a revolutionary ownership program for the Vision Jet. Designed as a completely turnkey program, VisionAir includes everything needed to own, operate and manage a Vision Jet, making the reality of owning the world’s first Personal Jet more accessible than ever. The new program is a bold new step following tremendous growth of the Vision Jet.

Additionally, in 2020, charter service operator Verijet began operations with an all-Vision Jet fleet to provide convenient point-to-point short haul flights for customers in the Southeastern region of the United States and flies to over 5,400 smaller, less-congested airports. Chosen for its safety, comfort and overall efficiency, the Vision Jet is the perfect aircraft for Verijet’s regional missions.

In early 2019, the company announced the launch of the next generation Vision Jet– “G2” – with enhanced performance, comfort and safety. Evolutionary features include increased cruise altitude, speed and range, along with a newly upgraded Perspective Touch+ by Garmin flight deck. In addition to the upgrades, several innovative technologies were added to the G2 Vision Jet, including a category-first Autothrottle, Flight Stream connectivity and more. Interior amenities further enhanced the passenger experience with new executive seats, thoughtfully engineered noise reduction and a passenger productivity console.

Launched in 2016, the Vision Jet defined a new category in aviation – the Personal Jet – with its spacious pilot and passenger-friendly cabin featuring panoramic windows, reclining seats, comfortable legroom for five adults and two children and the only turbine aircraft with a whole airframe parachute system as standard equipment. A new milestone in the journey of the Vision Jet was reached in 2018, with the historic win of the Robert J. Collier Trophy from the National Aeronautic Association.

In 2019, Cirrus Aircraft announced the TRAC Series, a purpose-built configuration of the best-selling SR Series line of aircraft developed specifically for flight training institutions. The TRAC Series is thoughtfully crafted with reliability, durability and economy in mind to meet the rigors of high-tempo flight operations, while providing industry-leading safety and performance for both the student pilot and flight instructor. Combining the Perspective+ flight deck along with the unrivaled performance and safety uniquely found in the SR Series, the TRAC Series includes tailored features such as rear seat push-to-talk functionality and a landing gear simulator aimed at increasing training productivity.

Cirrus Services continued to grow in 2020, launching new offerings to customers to further enhance the ownership experience. Highlighting these new offerings was the expansion of services for international owners with the availability of international finance options through Cirrus Finance and the launch of an EASA-approved Vision Jet Training program in Europe. Additionally, Cirrus Direct has expanded offerings of Cirrus Certified parts and upgrades to customers around the world – making owning and maintaining your Cirrus aircraft more convenient than ever. The company also launched a newly improved website in 2020 to further activate the experience for customers around the world through the ease of additional digital tools and connections.

Cirrus Services expanded in 2019 with the addition of a new Factory Direct location in McKinney, Texas offering factory service, with additional services to include flight training, maintenance and aircraft management. The company also opened a new Factory Service Center at its Vision Center Campus in Knoxville, Tennessee, increasing service center capacity and opening up additional space for a dedicated Paint and Detail center.

The launch of Cirrus Services in 2018 signified another milestone in Cirrus Aircraft’s ongoing plans to redefine the personal aviation ownership experience by providing a world-class customer experience for life. Cirrus Services recognizes the customer’s needs before, during and after initial aircraft delivery by combining Flight Training, Service and Support into a single, dedicated business unit. The dedicated group is focused on growing capabilities and offerings at the company’s expanding list of Factory Direct centers, as well as through a network of authorized service and training partners across the globe.

Recognized as the first recipient of the Joseph T. Nall Safety Award from the Aircraft Owners and Pilots Association (AOPA), Cirrus Aircraft continues to transform pilot training and safety with Cirrus Approach. As a comprehensive program, Cirrus Approach provides ongoing training to new and experienced pilots with their lifestyle in mind through award-winning in-person and online training courses. The company has continued to innovate pilot training in recent years, with the launch of the redesigned cirrusapproach.com and the addition of Flight Fix – a unique monthly video podcast to further support its mission of “training as a lifestyle”. Over 16,000 pilots and owners have joined the program as of early 2021.

Cirrus Embark™ – the company’s transition training program designed for new owners of pre-owned Cirrus aircraft – also continues to expand, exceeding 1,100 training completions awarded since its launch in 2017. This revolutionary program provides Cirrus-specific, standardized differences and transition training for a licensed pilot who purchased a pre-owned Cirrus Aircraft. Included in the program is access to the Cirrus Approach Learning Portal, the Cirrus FOM and aircraft POH, access to the iFOM and one-on-one Cirrus Transition Training with an authorized Cirrus training provider.

Cirrus Aircraft is the recognized global leader in personal aviation and the maker of the best-selling SR Series piston aircraft and the Vision Jet, the world’s first single-engine Personal Jet, as well as the recipient of the Robert J. Collier Trophy. Founded in 1984, the company has redefined performance, comfort and safety in aviation with innovations like the Cirrus Airframe Parachute System (CAPS) – the first FAA-certified whole-airframe parachute safety system included as standard equipment on an aircraft. To date, worldwide flight time on Cirrus aircraft has passed 11 million hours and 203 people have returned home safely to their families as a result of the inclusion of CAPS as a standard feature on all Cirrus aircraft. The company has four locations in the United States, located in Duluth, Minnesota; Grand Forks, North Dakota; Knoxville, Tennessee and McKinney, Texas.