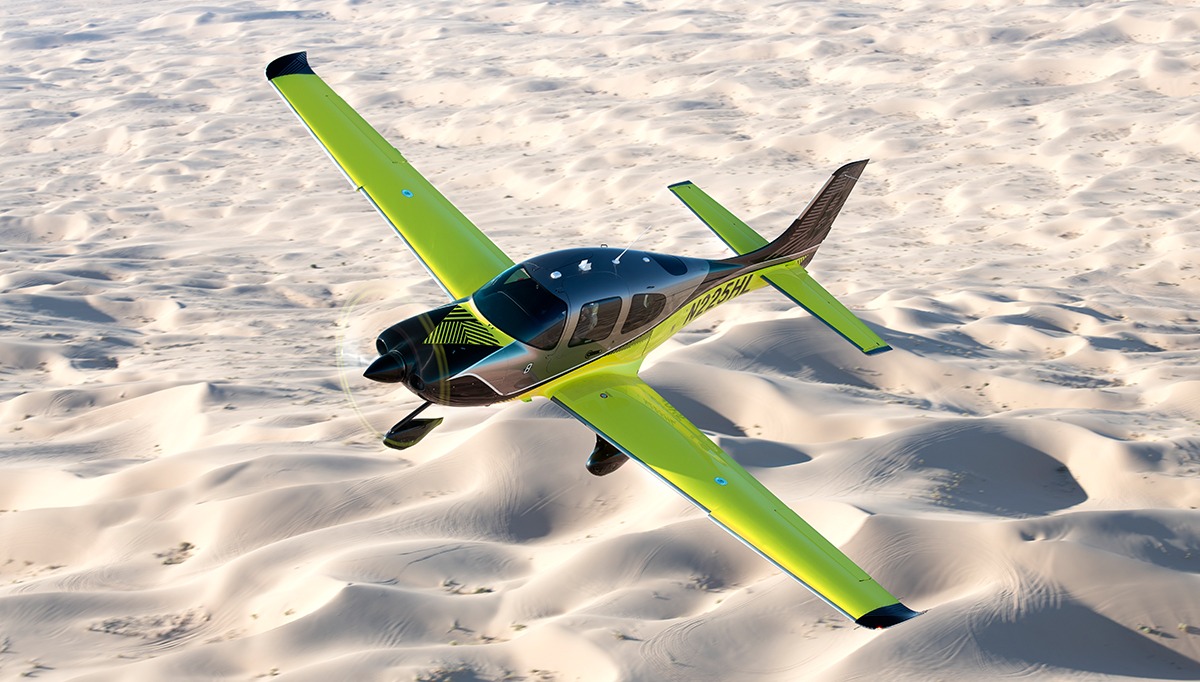 “The SR Series has an incredible history of innovation, evolution and invention,” said Zean Nielsen, CEO at Cirrus Aircraft. “Our team took that as inspiration to create a Limited Edition that breaks out of the boundaries of traditional aircraft design to reflect the energy and excitement of where we are going next.”

Echoing the momentum of the runway lines as you prepare for take-off, the 8000 Limited Edition SR Series features an exterior that is impossible to miss. The design is accentuated by an industry-first Volt wing paint scheme, commanding attention on the ground and in the air. The unmistakable graphics and colors carry through into the interior with Volt stitching on the seats and embroidery on the door, and luxury perforated leather on the seats and throttle. More information on the 8000 Limited Edition SR Series, as well as the backstory of its design can be found here. In addition to the exciting new design, each of the limited run of eight (8) exclusive 8000 Limited Edition aircraft will be delivered along with a curated series of gifts and events for the new owners.

Cirrus Aircraft’s first high-performance SR Series airplane – the SR20 – was delivered in 1999 and transformed general aviation with intuitive avionics, game-changing performance and revolutionary safety systems, including the Cirrus Airframe Parachute System® (CAPS®). The SR Series has been the world’s best-selling single-engine piston for 18 years in a row, with a portfolio that includes the SR20, SR22 and the turbocharged SR22T. Later this year, the company will deliver its 8000th SR Series aircraft and exceed 11 million flight hours in more than 60 countries around the world.

The sixth generation SR Series – G6 SR Series – quickly reaffirmed Cirrus Aircraft’s position as the industry leader and, once again, raised the benchmark for high performance, single-engine aircraft. The 2017 G6 SR Series launched the high-speed Cirrus Perspective+TM by Garmin® flight deck, Cirrus SpectraTM wingtip lighting, premium cockpit connectivity solutions and more. In the following years, the G6 SR Series was further enhanced with flight deck upgrades and new features in connectivity, including the Cirrus Aircraft mobile app powered by Cirrus IQ™ for access to real-time aircraft data from virtually anywhere in the world, flight data streaming and the ability to text or call contacts on the ground with FlightStream 510.

Cirrus Aircraft is the recognized global leader in personal aviation and the maker of the best-selling SR Series piston aircraft and the Vision JetTM, the world’s first single-engine Personal Jet, as well as the recipient of the Robert J. Collier Trophy. Founded in 1984, the company has redefined performance, comfort and safety in aviation with innovations like the Cirrus Airframe Parachute System® (CAPS®) – the first FAA-certified whole-airframe parachute safety system included as standard equipment on an aircraft. To date, worldwide flight time on Cirrus aircraft has passed 11 million hours and 203 people have returned home safely to their families as a result of the inclusion of CAPS as a standard feature on all Cirrus aircraft. The company has four locations in the United States, located in Duluth, Minnesota; Grand Forks, North Dakota; Knoxville, Tennessee and McKinney, Texas. Find out more at www.cirrusaircraft.com.