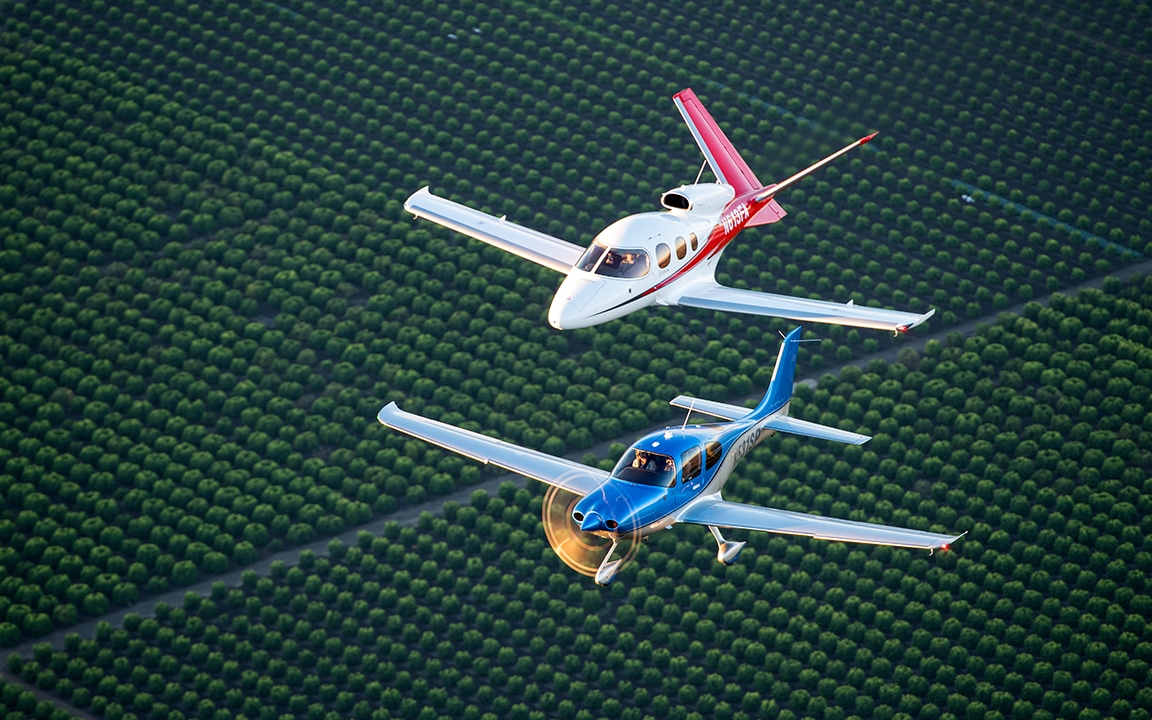 “Our annual performance at Cirrus Aircraft demonstrates our long-term commitment to continued core growth, our disciplined approach to maturing our turbine product line, the expansion of Cirrus Services and another year that validates our customer-focused enterprise strategy,” said Todd Simmons, President, Customer Experience at Cirrus Aircraft.

Simmons continued, “With this exceptional performance by the Cirrus Aircraft team, we are well positioned for continued success in both existing and emerging global aviation markets. On behalf of all Cirrus owners and operators around the world, these 2018 results again highlight our commitment to reimagining the future of personal aviation.”

The SR Series Continues to Soar

Cirrus Aircraft’s first high-performance SR Series airplane – the SR20 – was delivered in 1999 and transformed general aviation with intuitive avionics, game-changing performance and revolutionary safety systems, including the Cirrus Airframe Parachute System® (CAPS®). Today’s SR Series portfolio includes the SR20, SR22 and the turbocharged SR22T. Last year, the company celebrated the milestone of the delivery of its 7,000th SR Series aircraft and over 10.5 million flight hours in 60 countries around the world.

This year, the company will celebrate 20 years of the SR Series entering the high-performance single-engine piston market. Now in its sixth generation, the SR Series has been the best-selling general aviation piston aircraft in its class for seventeen consecutive years. The G6 SR Series launched in 2017 with the Cirrus Perspective+TM by Garmin® flight deck, which includes expanded avionics and flight planning options, luxury automobile-inspired Cirrus SpectraTM wingtip lighting, cockpit connectivity solutions and premium interior options.

Earlier this year, Cirrus Aircraft announced the addition of the Arrivée Special Edition SR Series inspired by “The Art of Arriving”. This unique aircraft expands on the luxury automobile inspired details that define a Cirrus aircraft interior with artisan handcrafted finishes and customization typically only available through the company’s unique Xi Design Studio.

A New Generation of the Vision Jet

In 2016, Cirrus Aircraft ushered in a new era in personal transportation with the FAA certification of the world’s first single-engine Personal Jet – the Vision Jet. The turbine aircraft defined a new category in aviation – the Personal Jet – with its spacious pilot and passenger-friendly cabin featuring panoramic windows, reclining seats, comfortable legroom for five adults and two children and the only turbine aircraft with a whole airframe parachute system as standard equipment. 2018 marked a new milestone in the journey of the Vision Jet, with the historic win of the Robert J. Collier Trophy from the National Aeronautic Association.

Last month, the company announced the launch of the next generation Vision Jet– “G2” – with enhanced performance, comfort and safety. Evolutionary features include increased cruise altitude, speed and range, along with a newly-upgraded Perspective Touch+TM by Garmin® flight deck. Innovative technologies unique to G2 include a category-first Autothrottle, Flight Stream connectivity and more. Amenities were also added to the passenger experience, including new executive seats, thoughtfully-engineered noise reduction and a passenger productivity console.

As production of the Vision Jet continues to accelerate, the company will also see the expansion into significant new markets in 2019, with deliveries to customers in Brazil, South Africa and Australia.

The launch of Cirrus Services in 2018 signified another milestone in Cirrus Aircraft’s ongoing plans to redefine the personal aviation ownership experience by providing world-class customer service for life. Cirrus Services recognizes the customer’s needs before, during and after initial aircraft delivery by combining Flight Training, Service and Support into a single, dedicated business unit. The newly formed group is focused on growing capabilities and offerings at the company’s expanding Vision Center Campus in Knoxville, Tennessee, as well as through a network of authorized service and training partners across the globe.

Facilities and Economic Impact Expands Across All Three Locations

Also highlighting continued growth over the last year was the addition of technical, manufacturing and service positions across all locations, as well as the expansion of the facility in Grand Forks, North Dakota by nearly 30,000 square feet.

Recognized in 2016 as the first recipient of the Joseph T. Nall Safety Award from the Aircraft Owners and Pilots Association (AOPA), Cirrus Aircraft continues to transform pilot training and safety with Cirrus Approach. As a comprehensive program, Cirrus Approach provides ongoing training to new and experienced pilots with their lifestyle in mind through award-winning in-person and online training courses. Over the last year, the company has continued to innovate in pilot training, with the launch of the redesigned cirrusapproach.com and the addition of Flight Fix – a unique monthly video podcast to further support its mission of “training as a lifestyle”. Nearly 16,000 pilots and owners have joined the program as of early 2019.

Cirrus EmbarkTM – the company’s program designed for new owners of pre-owned Cirrus aircraft – also continues to expand, exceeding 700 training events since its launch in 2017. This revolutionary program provides Cirrus-specific, standardized differences and transition training for a licensed pilot who purchased a pre-owned Cirrus Aircraft. Included in the program is access to the Cirrus Approach Learning Portal, a copy of the Cirrus FOM and aircraft POH, access to the iFOM and one-on-one Cirrus Transition Training with an authorized Cirrus training provider.

In addition, Cirrus Perception™ – the company’s sensor-capable special mission aircraft – continues to enhance law enforcement search and rescue efforts. Ideal for a broad range of missions, the Minnesota State Patrol uses the Cirrus Perception aircraft, including during the big game hosted in Minneapolis in 2018.

For the sixth consecutive year, Cirrus Aircraft will have an international presence in the Red Bull Air Race World Championships as a sponsor of Team 99 and U.S. Master Class Pilot, Mike Goulian. In 2018, Goulian set a record pace with an epic year of podium finishes, including 1st place in Abu Dhabi and Indianapolis and a 3rd place overall finish in 2018 world championship series. Goulian, a Cirrus Aircraft Ambassador, owner and pilot, joined Red Bull Air Race in 2006, claiming his first victory in Budapest in 2009. The Red Bull Air Race World Championship has become globally renowned as the fastest and most exhilarating motorsport on the planet, and Goulian and Team 99 are poised for another winning season following their podium finish at the 2019 season opener in Abu Dhabi.

Cirrus Aircraft is the recognized global leader in personal aviation and the maker of the best-selling SR Series piston aircraft and the Vision JetTM, the world’s first single-engine Personal JetTM, as well as the recipient of the Robert J. Collier Trophy. Founded in 1984, the company has redefined performance, comfort and safety in aviation with innovations like the Cirrus Airframe Parachute System® (CAPS®) – the first FAA-certified whole-airframe parachute safety system included as standard equipment on an aircraft. To date, worldwide flight time on Cirrus aircraft has passed ten million hours and 170 people have returned home safely to their families as a result of the inclusion of CAPS as a standard feature on all Cirrus aircraft. The company has three locations in the United States, located in Duluth, Minnesota, Grand Forks, North Dakota and Knoxville, Tennessee.