DULUTH, Minn., (February 4, 2014) – Cirrus Aircraft today announced that its SR-series Engineering and Design Team has been recognized as the recipient of the prestigious 2013 Joseph T. Nall Safety Award, for pioneering a wide array of safety features designed for single-engine aircraft. The award is presented annually by the International Air & Transportation Safety Bar Association (IATSBA) to honor industry leaders who have made noteworthy contributions to aviation and transportation safety. Prior recipients include Al Haynes, captain of the ill-fated United Flight 232 that crash landed in Sioux City, Iowa. Haynes is generally credited with saving the lives of most of the 300-plus people on board. 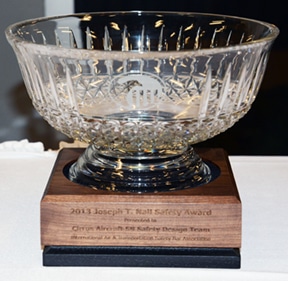 Cirrus Aircraft Co-Founder and CEO Dale Klapmeier and members of the Cirrus Aircraft Design Team accepted the award during an awards dinner at the National Flight Academy in Pensacola, Fla., in conjunction with the IATSBA annual conference in late 2013. These team members are:

Cirrus Aircraft’s SR-Series aircraft have introduced new safety technologies to general aviation (GA) not previously seen in the industry. These have driven broad market acceptance of Cirrus aircraft and established new safety and technology standards for the industry. The company made history in 2002 with the first-recorded rescue of a private pilot with the Cirrus Airframe Parachute System™ (CAPS).

“We have the deepest regard for the aviation leaders who have received this award in past years, and Cirrus Aircraft is honored to join them,” Klapmeier said. “However, our work is far from done as we continue to challenge ourselves to make flying safer and more secure for new and seasoned pilots alike.”

From the inception of the SR-series aircraft, Klapmeier and the design team challenged conventional wisdom and industry design standards while exploring ways to build a better, safer airplane. Cirrus has introduced key safety enhancements to the industry, including the well-recognized CAPS, as well as composite construction, advanced aerodynamics, airframe ice protection and Cirrus Perspective™ avionics by Garmin® – with its hypoxia recognition, bank-angle control and stall protection systems.

Cirrus Approach℠, a multi-year pilot training initiative designed to enhance Cirrus pilot safety and reduce the general aviation (GA) accident rate, is the latest iteration of Cirrus’ commitment to safety. “There is little doubt that Cirrus SR-series aircraft have the most capable technologies available for safe flight,” added Travis Klumb, Cirrus’ Director of Flight Operations, “But, as pilots and owners, we have to become and remain proficient in order to use them successfully. Cirrus’ and COPA’s (Cirrus’ Owner Group) complementary communication and training strategies will enable the potential of these technologies.”

ABOUT CIRRUS AIRCRAFT
Cirrus Aircraft is a recognized leader in general aviation. Its all-composite line of personal aircraft – the SR20, SR22 and the turbocharged SR22T – incorporate innovative and advanced performance, electronic and safety technologies, including Cirrus Perspective™ by Garmin® avionics and the unique Cirrus Airframe Parachute System™ (CAPS). To date, total time on the worldwide Cirrus Aircraft SR-series fleet surpassed five million flight hours with 85 lives saved as a direct result of CAPS being a standard safety feature on all Cirrus aircraft. The Cirrus Vision SF50 jet, with over 550 production positions reserved, will provide a new personal and regional business transportation solution: the personal jet. All Cirrus aircraft are made in the U.S. with a direct sales force in North America and authorized sales centers covering export markets in 60 countries around the world. Cirrus Aircraft is wholly owned by China Aviation Industry General Aircraft Co., Ltd (CAIGA). For additional information on Cirrus and its products please visit cirrusaircraft.com.

ABOUT IATSBA
Originally founded in 1984 as the National Transportation Safety Board Bar Association, today’s International Air & Transportation Safety Bar Association has grown to comprise attorneys from across the United States and other parts of the globe. The mission of IATSBA is to enhance the professional legal education of its members and to foster collegiality and professionalism in the practice of aviation and transportation law. In addition, IATSBA seeks to advance the development of aviation and transportation law in a manner that improves the safety of transportation worldwide while protecting the rights and privileges of those individuals and companies active in the field.