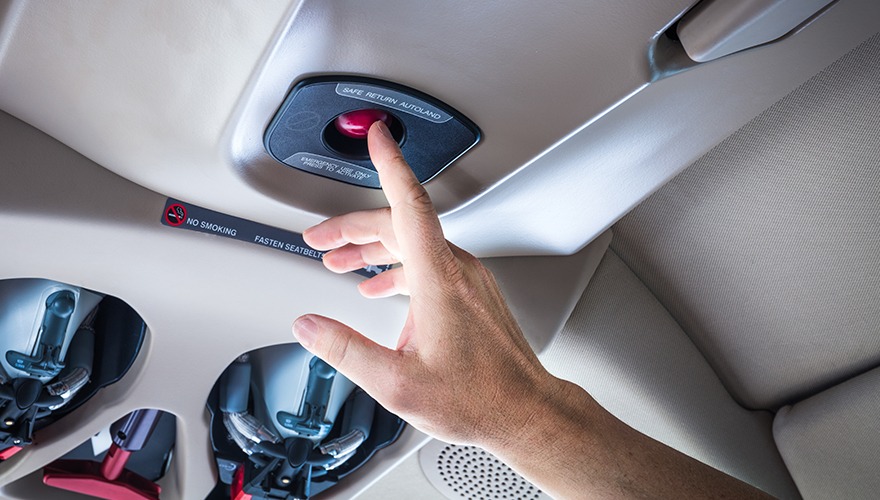 Duluth, Minn. and Knoxville, Tenn. (30 October 2019) – Cirrus Aircraft, the global leader in personal aviation, ushered in a new era of innovation today with the introduction of Safe ReturnTM – a revolutionary emergency autoland system that enables passengers to land the Vision JetTM with just the touch of a single button. Once activated when available, Safe Return assumes control of the aircraft and transforms the Vision Jet into an autonomous vehicle that navigates to the nearest suitable airport for landing, communicates with air traffic control, lands and brings the aircraft safely to a complete stop. The Vision Jet, with both Safe Return and the award-winning Cirrus Airframe Parachute System® (CAPS®), provides a comprehensive, must-have total safety solution unique to G2 Vision Jet operators.

“Our mission is to make personal aviation more accessible by continuing to improve passenger comfort and safety,” said Zean Nielsen, Cirrus Aircraft Chief Executive Officer. “Safe Return delivers the next step towards autonomous flight, bringing a new level of confidence to the overall flying experience by providing the ultimate level of safety and control to passengers. Together, with the Cirrus Airframe Parachute System® (CAPS®), we have once again set a new standard for safety in personal air travel.”

Easily accessible by passengers in the Vision Jet cabin, Safe Return is activated by the touch of a button when available. Once pressed, the autonomous system analyzes terrain and datalink weather to determine the optimal airport for landing, and simultaneously begins communication with Air Traffic Control (ATC). Powered by the Perspective Touch+TM by Garmin® flight deck, Safe Return utilizes all available aircraft data streams, including available fuel, to safely navigate the Vision Jet to the identified airport and transition on to final approach for the appropriate runway based on ground winds. Autothrottle – launched earlier this year on the new G2 Vision Jet –and the automatic flight control system manage the aircraft’s speed, altitude and path, while the system automatically lowers the flaps and landing gear on final approach. Safe Return culminates in the aircraft making a fully autonomous landing on the intended runway and coming to a complete stop, allowing passengers to exit the aircraft.

Included during this entire process is constant communication with ATC – another layer of autonomy that provides assurance to passengers experiencing a critical situation. Upon activation, Safe Return immediately transmits an emergency message to ATC. Using text and speech technology, the system communicates the aircraft’s intentions over the appropriate ATC frequency, the 121.5 emergency voice frequency, and also switches to the universal emergency transponder code. ATC is automatically updated at regular intervals of the aircraft’s location, emergency situation and intended airport landing location. These communications begin the process of activating emergency services at the airport of intended landing to assist the passenger and pilot upon arrival.  Safe Return can be easily disengaged by the pilot with a simple press of the Autopilot disconnect button on the yoke if a passenger inadvertently activates the system.

In 2016, Cirrus Aircraft ushered in a new era in personal transportation with the FAA certification of the world’s first single-engine Personal Jet – the Vision Jet. The turbine aircraft defined a new category in aviation – the Personal JetTM – with its spacious pilot and passenger-friendly cabin featuring panoramic windows, reclining seats, comfortable legroom for five adults and two children and the only turbine aircraft with a whole airframe parachute system as standard equipment. Earlier this year, Cirrus Aircraft unveiled and began delivery of the G2 Vision Jet, offering enhanced performance, comfort and safety with increased cruise altitude, speed and range, and a newly-upgraded Perspective Touch+TM by Garmin® flight deck. The company expects to begin delivery of Vision Jets equipped with Safe Return in early 2020.

More information on Safe Return and the G2 Vision Jet can be found at www.cirrusaircraft.com/visionjet.

Cirrus Aircraft is the recognized global leader in personal aviation and the maker of the best-selling SR Series piston aircraft and the Vision JetTM, the world’s first single-engine Personal JetTM, as well as the recipient of the Robert J. Collier Trophy. Founded in 1984, the company has redefined performance, comfort and safety in aviation with innovations like the Cirrus Airframe Parachute System® (CAPS®) – the first FAA-certified whole-airframe parachute safety system included as standard equipment on an aircraft. To date, worldwide flight time on Cirrus aircraft has passed 10.5 million hours and 186 people have returned home safely to their families as a result of the inclusion of CAPS as a standard feature on all Cirrus aircraft. The company has four locations in the United States, located in Duluth, Minnesota, Grand Forks, North Dakota, Knoxville, Tennessee and McKinney, Texas. Find out more at www.cirrusaircraft.com.