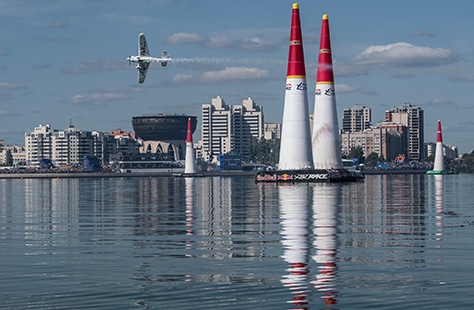 With the last three races of the season closing in, Cirrus Ambassador, Mike Goulian, is leading the pack of 14 Red Bull Air Race pilots by six points. The lead is substantial given the tight margin between racers all season, where just a tenth of a second has made the difference on the podium.

The most recent race in Kazan proved the Goulian team has found the winning formula of consistency and confidence. The weather in the capital city of Tatarstan in Russia was gorgeous as 128,000 spectators watched the 14 pilots vie for critical points leading into the final races. With an extremely low margin of error, the Final 4 pilots flew flawless races that resulted in a win for the Czech Republic’s Martin Sonka and a very close 2nd place finish for Goulian, who trailed Sonka by just 0.115 seconds.

“It feels amazing to be back here on the podium again in Kazan. Five races and four podiums,” said Goulian following the race in Kazan. “We are going to try to keep winning. This is not a time to play defense. We will just keep our foot on the gas and try to be consistent. When the opportunity to win arises, we will take it.”

And consistent he has been. The results in Kazan marks the fourth time Goulian has placed in the top-three and the fifth time in the Final 4 in five races total this season. The world is watching as he heads on to the last two races in Wiener Neustadt (Austria) and Indianapolis (U.S.), and, ultimately, the season finale in Fort Worth (U.S.) on the 17th and 18th of November.

Goulian began flying at the young age of 15 and completed his solo on his 16th birthday – the youngest age allowed by the FAA. He purchased his first aerobatic airplane one year later and is one of just seven pilots to earn the triple crown of flying honors: the Art School Memorial Award, Bill Barber Award and ICAS Sword of Excellence. He was also the first civilian to fly in formation with the Blue Angels and is the only honorary member of the Navy demonstration squadron.

Catch all of this year’s Red Bull Air Race action and follow along as Mike Goulian competes for the World Championship at airrace.redbull.com.